South India is very familiar for its aromatic filter coffee. The filter, used for brewing South Indian Coffee, is of various sizes. This filter includes different parts. The pierced upper container is useful for draining decoction. The lower one is intended for collecting this decoction, a pressing disc and a lid.

The most commonly used coffee beans for making Kumbakonam Filter Coffee. These coffee species are very common in the southern hilly region. Hence this coffee is a special beverage in southern states, especially in Kumbakonam. This is also the reason why filter coffee is also called as Kumbakonam filter coffee or Kumbakonam degree coffee.

The name Kumbakonam Degree Coffee implies that it is a high-quality coffee, which is made of pure milk. In other countries other than India, filter coffee is called as ‘drip brew’. Coffee is also known with its other names such as ‘Bisneeru’ in Karnataka and ‘Kottai Vadineer’ in Srilanka. Filter coffee is often served with a metal device called tumbler, which is known as ‘dabarah’ in south India. 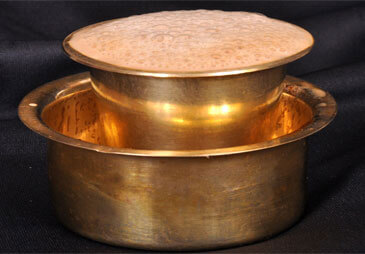